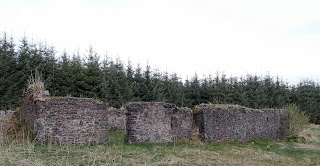 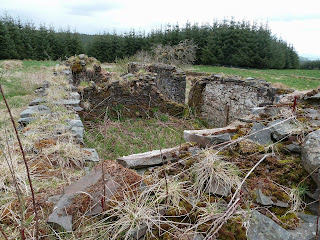 This was the most northerly farm steading in the parish.  In 'The Baron Courts of the Estate of Nithsdale 1757-1794', it is reported to be growing rye.  By 1928, it is recorded in Dumfries and Galloway Natural History and Antiquarian Society's Journal of proceedings (Third series, Vol XV) as not under cultivation.


The date of the farm's origin is unknown, but its occupants are recorded in records of covenanters 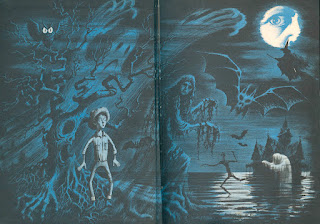 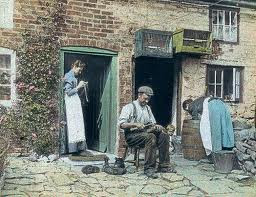 This story comes from: Traditions of the Covenanters; or Gleanings among the Mountains by the Rev Robert Simpson D.D. of Sanquhar published in Edinburgh by Gall and Inglis in 1846.
Smith was a cobbler, and was employed, according to the custom of the times, in the farmhouses and cottages through out the district, in making or mending shoes. From the trade which he followed, he received the nickname of Birsy, which stuck to him as pertinaciously as the bur clings to the coat of the shepherd boy, when once it has obtained an accidental adhesion. 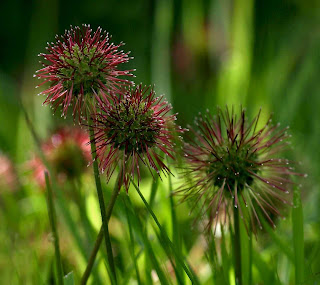 Birsy was not the most respected man in the world, as the notices already given of him plainly show, and he was, withal, a notorious coward. His timidity amounted to the timorousness of a child; and so oppressive was this weakness, that he durst not travel alone in the dark. Everything he heard or saw, after the shadows of the night closed in, excited terror, and made his hair stand on end. Ghosts and bogles, and fairies and witches, were everywhere. 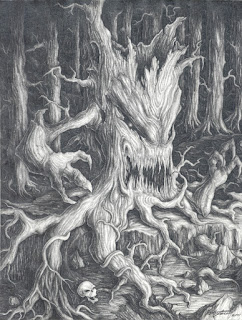 The dusky whin bush, the nodding thistle, the hare started from her lair, and the wild duck splashing in the lake, were sufficient to lift poor Birsy's bonnet from his head, and possessed a magic enough to cause the pearly drops of perspiration to start from his brow. No penance more severe could be inflicted on Birsy than to oblige him to walk in the dark; and hence his journeys were uniformly performed in broad daylight.
Birsy was a good tradesman, and therefore his services were in great request in the district, and more especially in the winter season, when the feet of the moorland peasantry required to be more firmly and tightly shod. 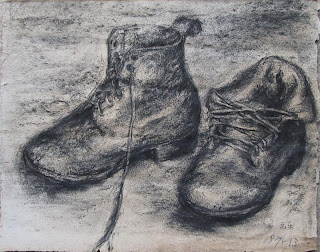 In this way he made a good livelihood, and was well entertained in the different houses where he plied his occupation. Some time prior to the disgraceful affair of the conventicle at Wardlaw, and when he sustained a somewhat less objectionable reputation than he subsequently did, he happened to be invited by the farmer of Auchengeith to come to his house on a Monday morning by break of day, as he had a whole week's employment in store for him. Birsy gladly accepted the invitation. There was, however, a difficulty in his way, and one of rather a serious nature. 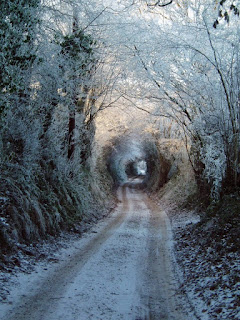 It was winter, and as Auchengeith was at some distance, he durst not travel in the dark of the morning, in order to reach the place in time to begin his work at the proper hour. To obviate this, however, he determined to take his journey on Sabbath afternoon, and to creep into the house in the dusk unperceived, as he was unwilling to show himself to the family, lest he should be rallied on a point he did not much relish, namely his superstitious cowardice. Birsy performed his journey, and succeeded in entering the house by stealth, and in secreting himself in the loft immediately above the kitchen. The fireplace in the kitchen was in the middle of the floor, and the smoke ascended through a wide opening in the roof, from which it escaped in eddying volumes into the open air. In the centre of the loft was a wide square aperture, which looked down on the fireplace beneath, and from which the persons sitting round the hearth could easily he seen. On entering this place Birsy stretched himself on the boards, along the edge of the opening, to enjoy the heat, and just far back as to avoid the smoke. 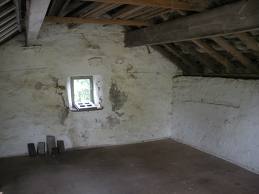 Here he lay very quietly, and listened to the conversation that was occurring below, and this spot he intended to make his dormitory for the night.
The gudeman of Auchengeith was a religious person, and one who instructed his family in the fear of God. In the olden time, among the pious part of the peasantry of Scotland, the Sabbath evening was spent in instructing the household from the catechism and in devotional even The Lord's day was kept with great solemnity; it was religious, and a season of much spiritual refreshment. 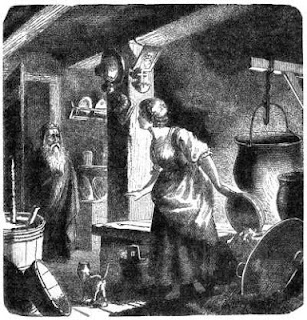 The household of Auchengeith were, on the evening on which Birsy arrived, arranged round the blazing pile of peats on the hearth, and employed in the exercises befitting the day of holy rest. In the interval between catechising and family worship, some of the domestics alluded to Birsy's coming in the morning, and to the necessity of having things in readiness on his arrival; and some remarks were made respecting his want of religion, and other things that were unbecoming in his character. This conversation, however, he did not hear; for by this time he was in a profound sleep. "Let Birsy alone," said the gudeman, "and let all of us look to ourselves, and see that our profession and behaviour be as they ought."
When the household were gathered in a circle round the fire, and were singing the psalms of David in worship, they were startled by the descent of a cobbler's awl, which fell with a birle  on the hearth. Those that sat near the place looked with astonishment at one another, and the inexplicable circumstance produced a momentary cessation in their singing. How an elshin, as it was termed in their dialect, could drop from the loft in this ominous manner, on the Sabbath evening, and in the time of worship, was more than they could divine. They began to feel eery, and to withdraw in a wider circle from the ? spot. The gudeman noticed the movement, and the whispering beyond the fire, but made no remarks, not wishing to interrupt the worship.  He next proceeded to read a portion of Scripture, and during the exercise a broad-bladed knife, firmly ingrafted in a thick wooden heft, fell with a rebound on the hearthstone, and lay sharp and glittering before the fire-place.

The consternation was now extreme, and they rushed to the opposite side of the apartment. The venerable master of the house, who held the Bible on his knee, paused, and eagerly inquired into the cause of the disturbance. 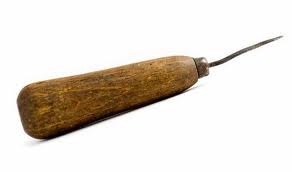 He was informed that first an awl and then a large knife had fallen from the loft on the floor.

The worthy man, who was not altogether free of the superstitious notions of the times, considered the incidents as a sort of miraculous reproof for their profaning the Sabbath in talking of Birsy's character, which should not once be named on the Lord's Day. He considered that his interpretation of the incidents was correct, seeing the awl and the knife were the implements of a shoemaker. In this manner he read a lecture to his household on the propriety of speaking evil of no man, and on the duty of abstaining from our own words on the Sabbath-day.
The disturbance in the kitchen below awoke Birsy from his sound sleep on the edge of the loft that overlooked the fire-place. The poor man, forgetting where he was, and being overcome with drowsiness and the sound which was ringing in his ears, began to bestir himself, and, in the act of
turning, fell plump down bodily into the fire among the smoking peats. 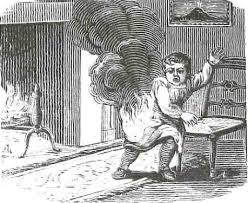 All was now uproar, and every one fled as for his life. Here was the very embodiment of all evil himself that had appeared in the midst of them, and none had the confidence to outface so ominous a visitation. Not one was found possessed of fortitude sufficient to inquire into the matter, save the head of the household himself, who, having mustered up all his firmness, laid hold on the object before him, and dragged it from the burning pile. On examination it was found to be the veritable Birsy himself, who. in dust and smoke, had made his descent into the kitchen of Auchengeith, on the quiet Sabbath evening, when the peaceful family were engaged in the appropriate exercises of the day of rest.
The mystery was now unfolded. The family were called in, and the hapless cobbler narrated the circumstances of the case. Their consternation now gave place to very different feelings, which, had it been on another day of the week, would have found vent in bursts of merriment and raillery.
Alter the affair of the conventicle, Smith fell into a state of great, mental distress of the impiety of his conduct in this instance, and the conviction of the general irreligiousness of his character in other respects, drove him to distraction. He lived despised by others, and despising himself, till his life became an insupportable burden, and, like Judas, he hanged himself. He was found by his own sister, suspended in one of the outhouses belonging to William Swan, (at Braehead) and the circumstance created the deepest sensation in the neighbourhood.

As soon as the news of the painful occurrence spread abroad, every person seemed horror-struck; for he was regarded as a very wicked man, and his end was viewed as the natural consequence of his nefarious life. This poor man, instead of fleeing to the Saviour for the forgiveness of his sins, yielded to despair, not understanding that all sins, the greatest and the least alike, may be pardoned on the ground of the glorious propitiation of our great High Priest, who "is able to save to the uttermost."
In former times, and even till a very recent period, public opinion respecting acts of suicide was peculiar, and so peculiar as to forbid the sepulture in the common burying ground, of all persons who terminated their lives by their own hands. Happily, this opinion is, in our times, greatly
modified, if not altogether changed. In the days of William Swan, however, the feeling against such persons ran to the highest extreme, and the body of Smith was not allowed interment in the churchyard. In such cases, the custom was to bury on neutral land, either on the march between
two counties, or between two gentlemen's estates, that the dust of such unhappy persons might not find a resting place on any claimable property. There is a spot on the Lowther Hills, exactly on the borders of Nithsdale and Lanarkshire, which, for many generations, was employed as the burial-
place of the victims of suicide. It was with great difficulty that any individual could be found to remove the body of Smith, and to prepare it for burial; even his own nearest kindred refused to touch him, and he might have remained suspended till the flesh fell from his bones, had not the laird of Dalswinton induced a person to convey the corpse in a car to a place at Auchengeith, on the march between the lands of Closeburn and Queensberry, where he was buried. Smith's conduct at the conventicle, and his character generally, were so detested, that honest William Swan could not endure even to see the house standing in which he ended his life; and he forthwith demolished it, not leaving one stone upon another, that he might obliterate the scene of so vile an action, and testify his disapprobation of a character so infamous.


~~~~~~~~~~~~~~~~~~~~
Unfortunately this Brain Teaser was not identified by any of you, but, if you can add any more information now you have the answers, please send it to kirkmahoe@gmail.com

Further info from Alice on Birsy using map references:-For info.,  Braehead is at 952847 and Birse Brae centres about 953896.  Souters Grave is at 950903, about 1km west of Auchengeith.  Birsy's journey would have been about 4 miles.

: shoemaker
Posted by Kirkmahoe News at 11:11