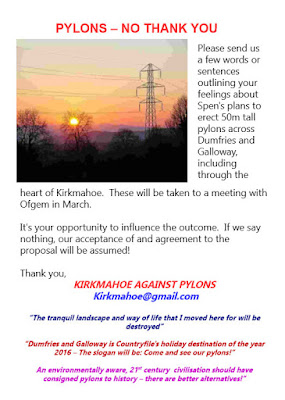 You can also leave your thoughts anonymously in the comments section below.We are hoping for lots of comments folks as this could mean the difference between having pylons or not having pylons.
Posted by Kirkmahoe News at 16:58 3 comments:

In the last few years in Kirkmahoe,we have been affected by

We know from experience that in a big emergency, Dumfries and Galloway Council's resources are always stretched. Clearly, Emergency Services cannot be provided everywhere at once.

The council is working with communities to draw up local plans and put equipment in place so that people can help themselves.

We know that there are some members of our community who are considered vulnerable, but any of us could become vulnerable in a difficult situation.

As Kirkmahoe is made up of many small settlements and isolated properties which could become cut off from each other because of snow, fallen trees or floods, it would be helpful to have someone in each area with a list of contacts to call on for help and who knows where resources can be found.

Community Resilience Planning is already working well in Wigtownshire and we will be able to use their experience to help develop our plan.

You are invited and encouraged to attend an important meeting to draw up an Emergency Plan for Kirkmahoe
in Kirkton Hall on Wednesday 17th February at 7:30pm

Posted by Kirkmahoe News at 13:18 No comments:

Ciril Ostroznik's work with Ospreys in this Region and beyond

Ospreys were once a common sight in our country. Due to persecution by egg collectors, game keepers, loss of habitat, and other reasons, their numbers dwindled until, by 1916, there was only one nesting pair remaining. After this time there were no Ospreys in UK, until Spring of 1954 when a pair nested, successfully, at a site at Loch Garten, in the Scottish Highlands. The following year egg thieves persecuted the pair. It was only in 1959 that Ospreys were again sighted in the Scottish Highlands, and had a successful breeding season.
The osprey (Pandion haliaetus) — is also know by a variety of names such as fish eagle, sea hawk, river hawk, and fish hawk. As these names suggest, the osprey is a fish eater. Thus it lives near a body of water, where it can fish for food for itself, and its young. It fishes in both daylight and hours of darkness, and has specially adapted toes to enable it to grip its slippery prey with two front and two rear talons.

An osprey in flight, looks white, with a black lacy pattern along the wings and a black patch at the wrist area. A truly beautiful sight.
Since the comeback of the Osprey to our country, various breeding programmes have been set up to help re-establish the Osprey population. These programmes have proved to be very successful as the number of breeding pairs throughout the UK  is now thought to be between 200 – 250.

Crucial to these programmes is Ciril Ostroznik. 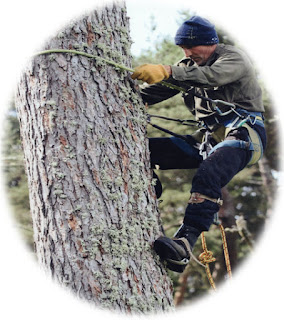 Ciril, a renowned expert on Ospreys knows exactly where they like to have their nests or eyries. They prefer to nest in trees, near to water, but can be up to five miles away from where they fish. Ciril, selects a site and builds a nest for the birds to find.
When Spring arrives, so do the Ospreys, around the end of March beginning of April. They arrive here all the way from Senegal in West Africa. 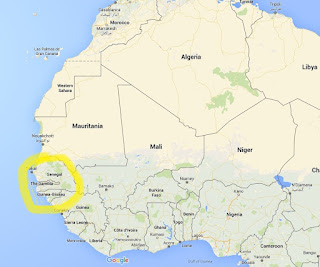 Established pairs arrive separately and like to use the same nest year after year. The younger birds, who start breeding between three and five years of age, will not take long to find Ciril’s nests, and settle in them.  Normally it takes a pair between two to three weeks to build their nest. These nests are large, and made of branches, twigs, mosses and lichens, pieces of bark, and grass. Established pairs will add to them over the years. They can reach 150 – 200 cms in height. Ciril stresses that he does not build platforms for the nests but that he builds a complete nest, safely anchored within the branches of the chosen tree. 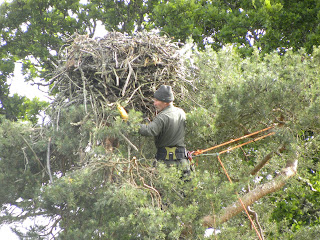 Ciril about to ring Osprey Chicks

Ciril’s Conservation work  has been responsible for attracting at least 12 active Osprey sites to Dumfries & Galloway. Because of his expertise, he has been asked to build nests in other parts of Scotland and Eire. Ciril also gives talks on the subject of Ospreys and their nesting habits.

Parent Osprey at the nest 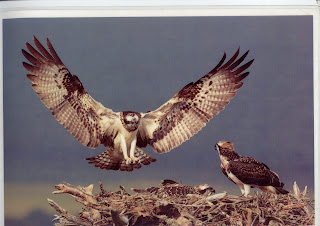 From the time the female lays her eggs in the last two weeks of April, it takes 37 days for them to hatch, and 53 days for the young to fledge. Whilst they are still in the nest, Ciril will ensure they are thriving and will ring the youngsters so they can be tracked. This work is crucial to the establishment of Ospreys in UK. Ciril is a member of the Dumfries & Galloway Raptor Study Group and a Licensed Member of the North Solway Ringing Group which is responsible for ringing and keeping track of birds of prey in the region. Ciril expresses his gratitude for all the help and support he has received from these groups 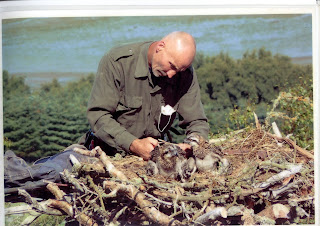 Because of his Conservation work a young five year old male Osprey has been spotted and photographed in recent months in Senegal. Ciril is proud to say that he knows this bird, which nest it came from, and how many siblings it has.

Ciril is now training members of his own family to take up his Conservation work, and hopes, eventually, to write a book on his life’s work with Ospreys and other Raptors.

Posted by Kirkmahoe News at 17:37 No comments: