Click on Merry Christmas for your greeting.
Posted by Kirkmahoe News at 17:20 No comments:

The organisers of the carol singing would like to extend a big
'Thank you'
to the generous people of Kirkton who donated a record amount - £181.06 - to this year's causes.
Further donations mean that Debra and myaware will each receive £115.03.
Thanks also to the singers and the people who provided such a good spread of food for them.

Gritting - Dumfries and Galloway Council gave up all gritting locally, except the bus routes, several years ago, so no one is responsible for icy pavements etc . They provided grit bins containing grit and salt mix which anyone can use to put on paths or roads in adverse  conditions, please take advantage of them.
Wishing you all a Happy Christmas
Jean Muir
Secretary Kirkmahoe Community Council
Posted by Kirkmahoe News at 12:53 No comments:

Ciril’s father, Herman, left the former Yugoslavia, and settled in Ae Village. He brought with him a love of raptors, particularly Sparrowhawks. Herman found employment with the Forestry Commission and, as the only birds of prey in the Scottish Forests were Sparrowhawks in those days, Herman became an expert on Sparrowhawks. During the school holidays the young Ciril would go out with his father. This was the start of Ciril’s lifelong interest in raptors. From an early age he would study the habits of the birds as well as getting in tune with other life in the forest.
Whilst Herman was working, Ciril would be climbing trees, thus honing the skills which would become invaluable to him, both in his future work, and as a nest builder for large raptors. He became so adept at climbing trees that he relates – “there is not a tree I cannot climb.”
When Ciril left school the obvious job for him was as a wood-cutter with the Forestry Commission. He did this work for many years until he decided to train as a tree surgeon. His climbing skills were now put to good use.
Being self-employed meant that he was also able to observe raptors in the area and could manage his free time to investigate nests and habitats of the large raptors. This led on to building nests for Ospreys. Indeed not only does he build nests in his own locale, he goes all over Scotland to do this work, such is his renown.
Nowadays, the youngster who is learning the climbing skills is Ciril’s grandson Arron, watched over by both Ciril and his son in law Keith.
As his knowledge of raptors grew Ciril joined the North Solway Ringing Group, just as his father had done before him. This group has been operational for at least fifty years. Since inception the group has grown to around thirty members and helpers. Many of the group have a specialist subject such as owls, kestrels, sea birds, small birds, raptors, etc covering all categories of bird.
All the birds are ringed using metal rings supplied by the British Trust for Ornithology, and the Group rings in the region of ten thousand birds a year. Ringers must have special Training to use the rings. 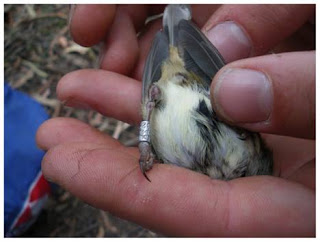 Each ring is numbered and  information, such where the bird was found, if in a nest, the number and sex of the young in the nest, is applied to this ring. The ring  number is assigned to the bird for its lifetime, and tells both where it came from and where it flies to.
The North Solway ringing Group holds  meetings in Castle Douglas and members from Ayrshire also attend.
There are regular times when the public can attend netting sessions to see how the birds are caught and ringed using mist nets (fine mesh nets).The birds are then set free, and can be identified wherever they go. The ringing Group also put up nest boxes and ring the young in the box. 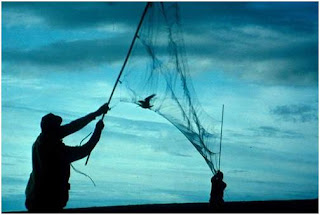 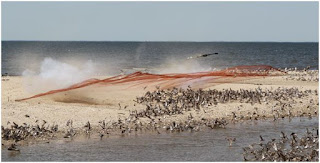 If you net shore birds and waders, you require a different type of netting. This is called canon or rocket netting.
The net has one edge attached to the ground, charges are connected up to the nets, which are then fired over the birds. This type of netting should only be undertaken by an experienced team to manage the process. The North Solway Ringing Group do canon netting along the sea shores and often will take boat trips to ring birds on the islands around the Solway.

Ospreys are ringed using both metal and large rings known as Darvic Rings which are made of  Durable Plastic. The large ring number can be seen from the ground allowing for easy identification in other parts of the world where the birds might fly to.  When the Osprey has been ringed The North Solway Ringing group then sends this ring information to Roy Dennis http://www.roydennis.org/   famous for Conservation of rare birds and the reintroduction of rare species such as white-tailed eagle, and red kite, He catalogues the Ring information and history, which can be accessed by anyone from other parts of the world where the bird might fly to. People from other parts of the world will get all the details of the bird from Roy Dennis from the ring number. 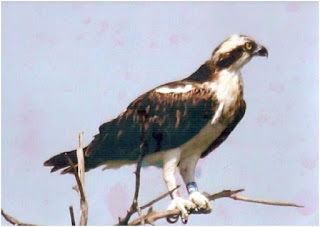 Hello Everyone
The Daytime Social Club is meeting tomorrow at 10.30am in Kirkton Hall for a Christmas treat. The speaker is Dr Hannay from Wigtown who is a versatile and talented musician who covers the origins of pipe music in the world and will treat the group to many forms of pipe music.
There is plenty of time to socialise with old friends and meet new ones whilst refreshments (including mince pies) are being served.
Please encourage anyone who you think may be interested, but does not have emails, to go along
Entrance charge £1
Regards
Jean Muir
Secretary Kirkmahoe Community Council
Posted by Kirkmahoe News at 15:22 No comments:

Sunday 17th December - Carol Singing in Kirkton. Meet at the pump 6.30pm with torches. It takes about 2 hours to go around the whole village and is followed by refreshments in Kirkton Village Hall - all welcome
Sunday 24th December - Christmas Carol Service. 6.30pm Dalswinton Barony Church
C11n - Roadworks, South Lodge, Duncow - There will be temporary roadworks for a couple of days this week for power line refurbishment

Wishing you a happy Christmas and prosperous New Year from the community council
Jean Muir
Posted by Kirkmahoe News at 12:35 No comments: 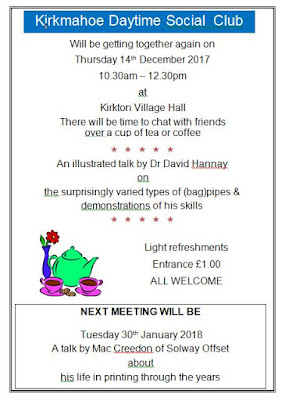 Please follow this linnk for more information on Dr Hannay who is tracellling all the way from Carsluith to see us. We hope for a great attendance and your support for Dr Hannay on the day. Click here
Posted by Kirkmahoe News at 11:34 No comments: 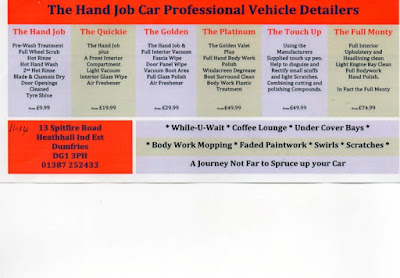 I went to the car wash. It was an experience. The car was washed with inside door and boot trims hand cleaned. Whilst waiting for the car one is ushered in to a sitting area where you are offered a tea or coffee and can watch TV on a lovely sofa.
When the car wash is complete the tyres have also been treated and there is not a speck of dirt to be seen. The car looks brand new,
This is just the basic wash other levels of cleaning are also on offer.
The business occupies 11-14 Spitfire Road and provides Powder Coating,  Garage and Tyre facilities as well as the excellent car wash, all overseen by congenial host and owner Andy who ensures everything is just perfect for you.


If your car is needing a wash go to the Hand Job. It is better than other car washes in town. You will not be disappointed.
Posted by Kirkmahoe News at 13:16 No comments: