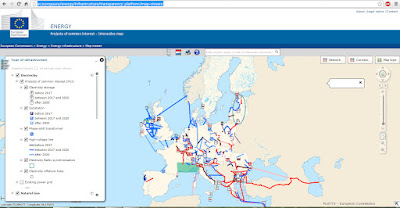 European Commission proposals for an Energy Union include a target for 10% interconnection of electricity grids across borders. The EU executive estimates that about €105 billion are required to upgrade Europe’s ageing electricity infrastructure, with €35 billion needed for cross-border interconnections alone.
Interconnectivity – of both gas and electricity grids – is seen as a key for EU member states to wean off their dependence on Russian gas and manage higher shares of variable renewable energy sources.
But the objective, initially decided in 2002, has remained elusive because of entrenched national interests. Twelve EU countries, mainly located on the EU’s periphery, remain below the 10% target. These are:
Special priority will be given to projects that will “significantly increase the current interconnection capacity where it is well below the established 10% objective,” the Commission said, citing Spain and Cyprus as countries where “efforts need to be stepped up”. An existing list of Projects of Common Interest (PCI) will be updated in Autumn 2015.
If everything goes according to plan, some 75% of PCIs are expected to be completed by 2020.
Links
http://ec.europa.eu/priorities/energy-union/docs/energyunion-annex_en.pdf