Dumfries & Galloway’s Ospreys
Dumfries & Galloway has such a healthy Osprey population that the youngsters are now moving to different locations in Scotland to breed. Out of eighteen active nests, not all breeding, and, providing conditions in a good year are favourable, one could anticipate that they could produce up to thirty chicks in a breeding season. Thus the need for the chicks to move elsewhere to find mates and nest.
Last year the region saw fifteen chicks successfully bred. This lower number was due to the extreme heat during the breeding season, which made it difficult for the adult to sit on the nest to hatch the chicks.
One chick from Threave ended up in Perthshire, and had a successful brood of three chicks. Another young bird for Dumfries & Galloway area successfully bred in Kielder Forest.

We know these locations, because the birds are ringed and so can  be traced by their ring details wherever they go.
Interestingly when a bird is ringed in a specific area, it is the responsibility of that particular ringing group. However if it moves to another area it then becomes the responsibility of the local ringing group of the new area.
It has to be pointed out that without Ciril Ostroznik’s dedication to building Osprey Nests there would not be an Osprey population in Dumfries & Galloway. Ciril has amassed a huge knowledge of Ospreys over the years. He has observed them first hand and knows their habits. He is the unsung hero of the Osprey World.

Not only has Ciril built nests in SW Scotland, he has also built them all over the Highlands, the Borders, Ireland and more recently in N England where he is aiming to build eight nests. He has never had any nest he has built fail. Ciril is delighted to be working with an enthusiastic group of local farmers there. This latest project is the brainchild of Brian Little, a well known ornithologist, who is overseeing and co-ordinating everything.

The nests are built on live trees, and require maintenance every couple of years to keep them accessible. If this is not done by Ciril they become non viable nests.

Ciril enjoys the pleasure of seeing the birds use his nests, and breed successfully. If any landowner wishes to have a nest built on his land, Ciril is always happy to travel and do this for them. People often ask him why the birds do not build their own nests, and he always replies with great mirth, ”Because I can build them better than they can. “

(Kirkmahoe News is happy to pass on any enquiries to Ciril.
email your enquiry to kirkmahoe@gmail.com)


Posted by Kirkmahoe News at 16:43 No comments:

Join us to help clean up our parish 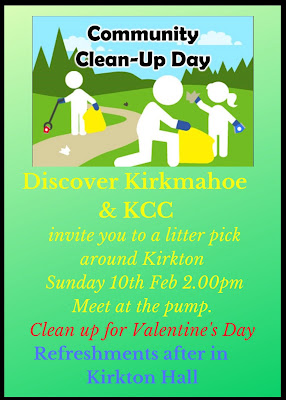 Posted by Kirkmahoe News at 11:01 No comments: 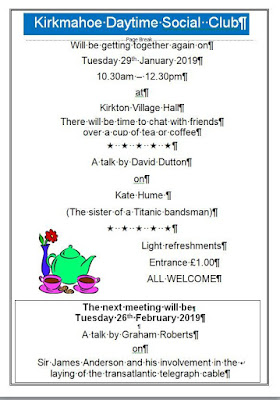 Posted by Kirkmahoe News at 10:10 No comments: