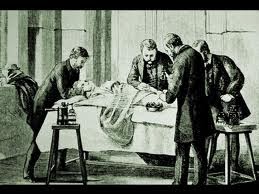 Posted by Kirkmahoe News at 15:52 No comments: 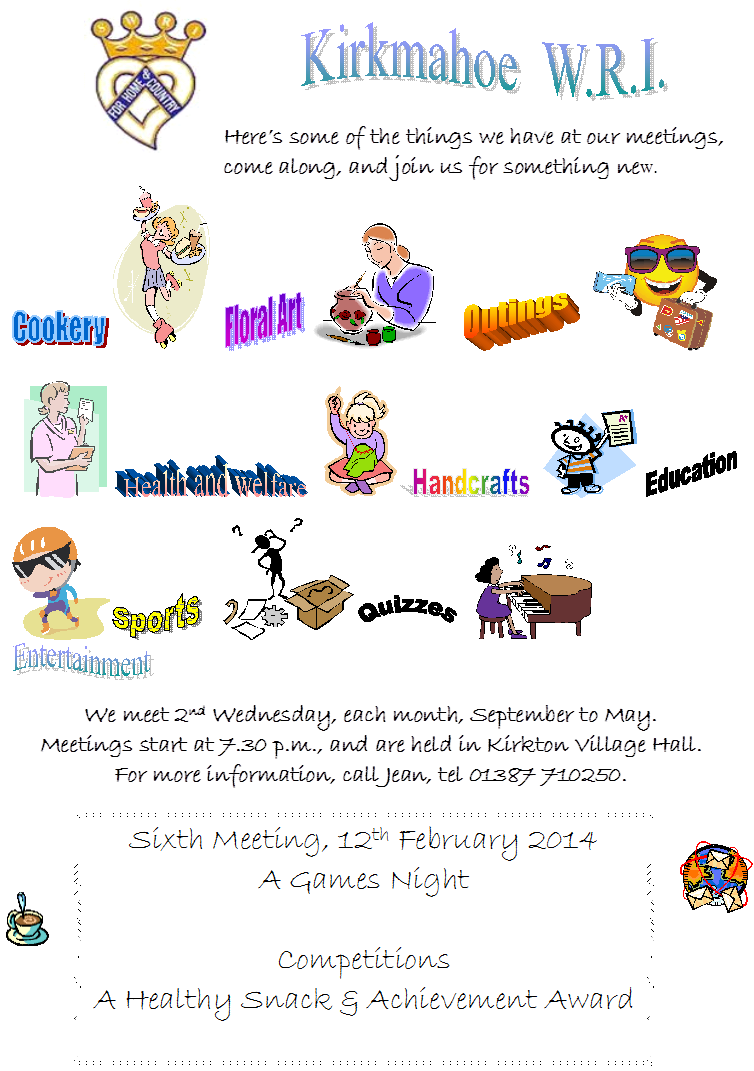 Posted by Kirkmahoe News at 14:51 No comments: 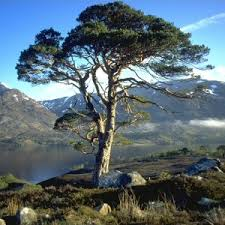 The Scots Pine has been chosen as Scotland's National Tree
Read more about it here.
Debate this on our Forum
Posted by Kirkmahoe News at 13:37 No comments: 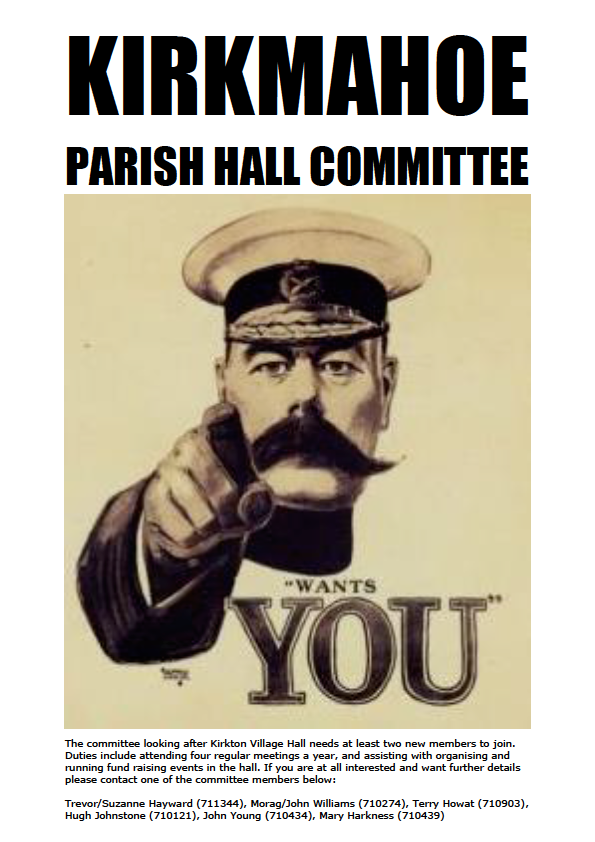 Posted by Kirkmahoe News at 20:02 No comments:

AN ARMY of volunteers is set to help Dumfries prepare for the world’s biggest Burns Night festival.

A total of 300 volunteers and more than 2500 community participants will be taking on duties from stewarding to performing and dressing up in costumes for the three-day 2014 Big Burns Supper.

Festival director Graham Main said: “It is the spirit of the Dumfries community that makes the festival what it is a showcase for everything that is good about the capital of Southern Scotland.

“This year the festival has 300 local volunteers doing everything from making sets and costumes to selling tickets and acting as stewards.

“They do an incredible job in working together to make sure that Big Burns Supper is a huge success.”

And a Homecoming Carnival is expected to have around 2500 local participants in a huge procession through the centre of the town.

Volunteers of all backgrounds and ages are currently involved in designing and making lanterns, puppets and costumes.

Around 30 local groups will participate in the carnival as artists, and over 100 volunteers are required in the street team to oversee this event alone.

Volunteering has been made more convenient and rewarding for 2014, with each participant given a festival pass to see shows.

And a new online training system has been introduced which volunteers can access from home at a time which suits them.

Roy Stairmand has volunteered with the festival since its beginning, and said: “Being a volunteer with Big Burns Supper is like having a supportive extended family. You get back as much as you put in every year and I’ve had so much fun working with people younger and older, from all walks of life, learning new skills.”

The Big Burns Night festival comprises three days of fun and entertainment in venues around Dumfries from January 24 to 26.

Taken from DNG24
Posted by Kirkmahoe News at 19:57 No comments:

We are all familiar with seeing and hearing low flying RAF jets in our area.
You might like to see a cockpit view of low flying. This is best watched in full screen. This particular jet does not come as far as Kirkmahoe but you can see familiar places in the Lake District. Hold on to your seats! Click on the following link.
Cockpit view
Posted by Kirkmahoe News at 12:05 No comments: 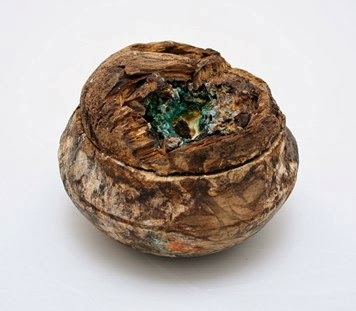 This month's Brain Teaser asks you to identify this very important article which was found in our area.
1 What is it?
2 Where was it found?

Answers to kirkmahoe@gmail.com
Posted by Kirkmahoe News at 12:22 No comments: 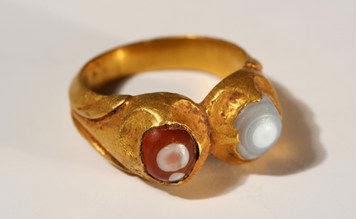 This beautiful GOLD RING was found in the Wellington Crescent area of Kirkton.
Posted by Kirkmahoe News at 12:32 No comments: 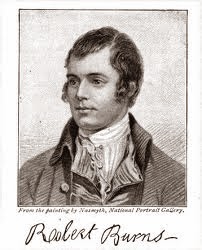 For those interested in Robert Burns some manuscripts have been found which are now on display in the National Library of Scotland. He wrote these for a Captain Robert Riddell of Friar’s Carse, Dumfriesshire, a wealthy and influential friend of Burns. One volume contains verse, while the other contains 27 letters.
Click here for more information.

Posted by Kirkmahoe News at 17:16 No comments:

Superfast Broadband on its way soon 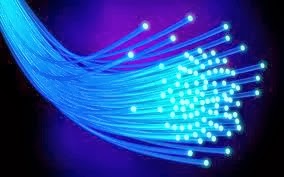 Brilliant News for all of us who are frustrated with the speed of our broadband on our computers, We will soon be able to access Superfast Broadband Services.To see when the Amisfield Exchange is due to be upgraded click here.

To learn more about Superfast Broaband click here
Posted by Kirkmahoe News at 13:53 No comments:

Do you wish to join the Kirkton Village Hall Committee? 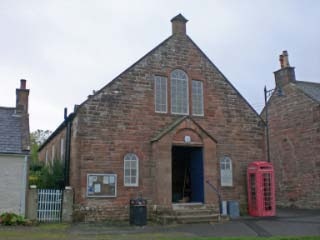 The Constitution specifies that eleven committee members represent the maximum number. After the AGM the number will be reduced to eight unless we can persuade some new members to join our ranks.

At one time there was a representative of the various groups using the hall on the committee. Currently KCC, the WRI, Guild, Badminton, Heritage Group, Pilates and Tai Chi are represented, in some cases by one person being associated with more that one organisation. The Old Tyme dancers, , and the Bowling Club are not represented. It is hoped that this letter will bring forth someone from some of these groups of users.

If your organisation is represented your voice can be heard when decisions are being made.

I am sure that most people in the community recognise the importance of maintaining a sound, well-equipped, financially-viable hall in our parish. Therefore people not connected with user groups would also be very welcome to sit on the committee.

There are four designated quarterly meetings of the committee in a year. We also like to hold a few fund-raising ventures. At present there is a rota of committee members who clean the hall for one month at a time. Moves are afoot to try to relieve members of this duty.

Please consider coming to the AGM and thinking about giving service for a year or two.

or to kirkmahoe@gmail.com
Posted by Kirkmahoe News at 13:01 No comments: 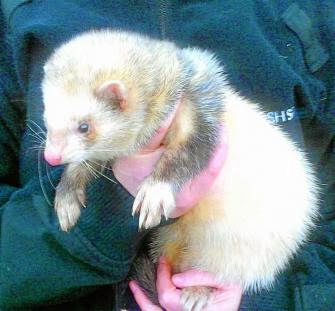 A SEARCH is on for the owner of a ferret which was sniffed out by a dog in a Kirkmahoe garden.‘Hammy’, as he is being called by Scottish SPCA staff, was discovered in a wheelbarrow and is now being cared for at Dunragit Kennels in Stranraer.Animal rescue officer Tricia Smith said: “Hammy is a friendly big boy who may have strayed from home."We rescue a fair number of ferrets found on the loose which might be because they're such crafty escape artists."They can fit through very small spaces so there's every chance there's someone in the local area looking for him.”And Tricia added: “If no-one comes forward for Hammy, we'll soon find him a loving new home."Anyone who recognises Hammy is being asked to call the Scottish SPCA Animal Helpline on 03000 999 999.
Posted by Kirkmahoe News at 10:52 No comments:

Despite all the rain and storms we have had, it has been a very mild winter here. Because of the rain, many of us will not have been looking too closely at our gardens.However, Mother Nature is at work, and we have been sent the first photograph of some little snowdrops which are blooming in David & Alice's garden. 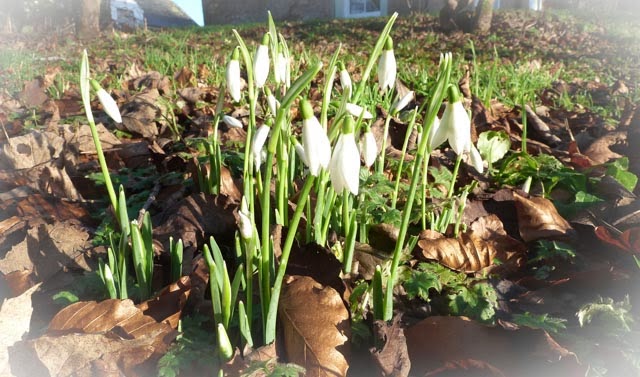 How pretty they look.

It might be worthwhile having a look to see what signs of Spring are showing in your own gardens. Caution, we must not be too complacent as it is only January and there is a forecast of colder weather to come.

Photos welcome.
Posted by Kirkmahoe News at 14:10 No comments: 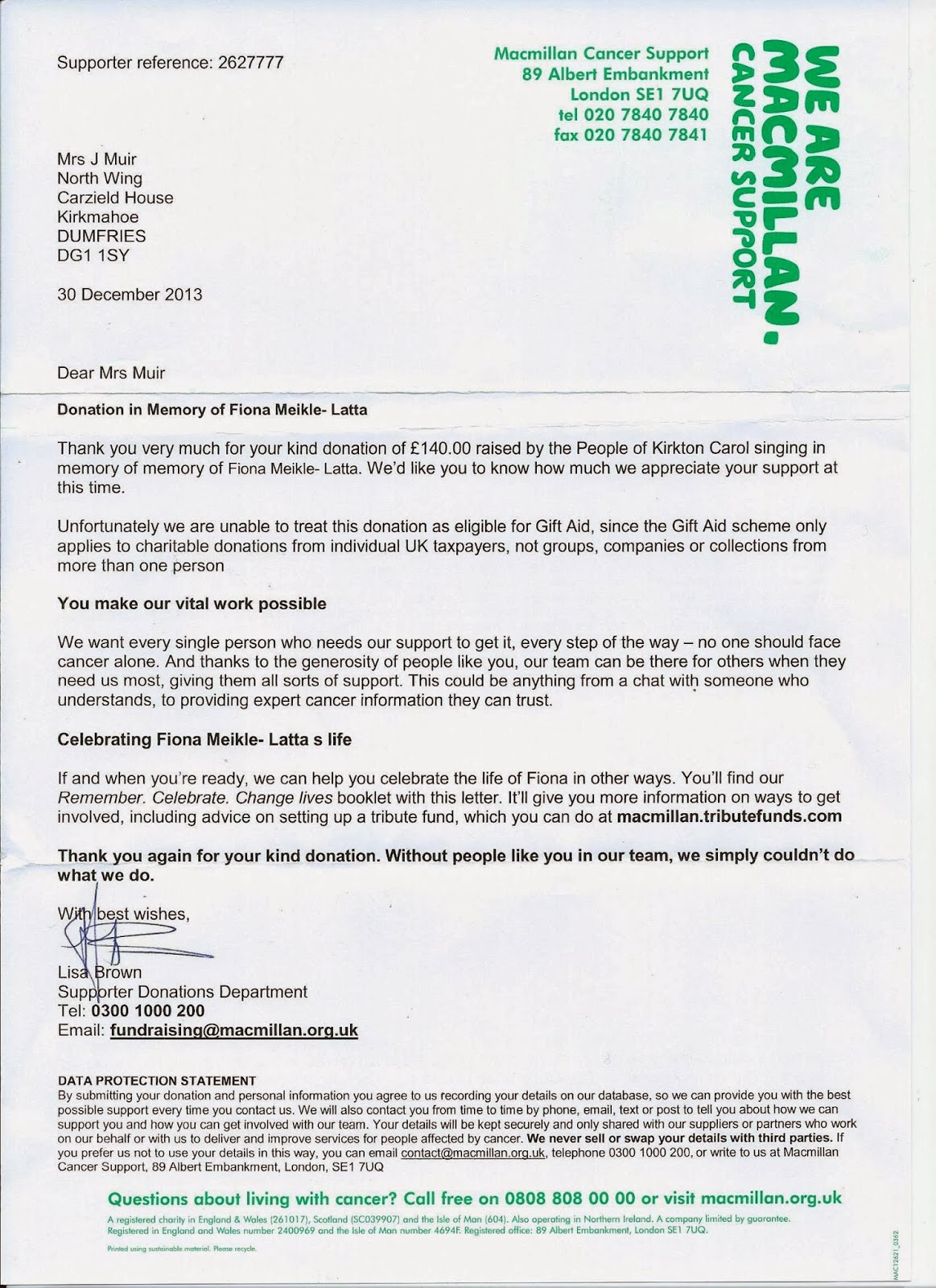 Posted by Kirkmahoe News at 21:18 No comments: 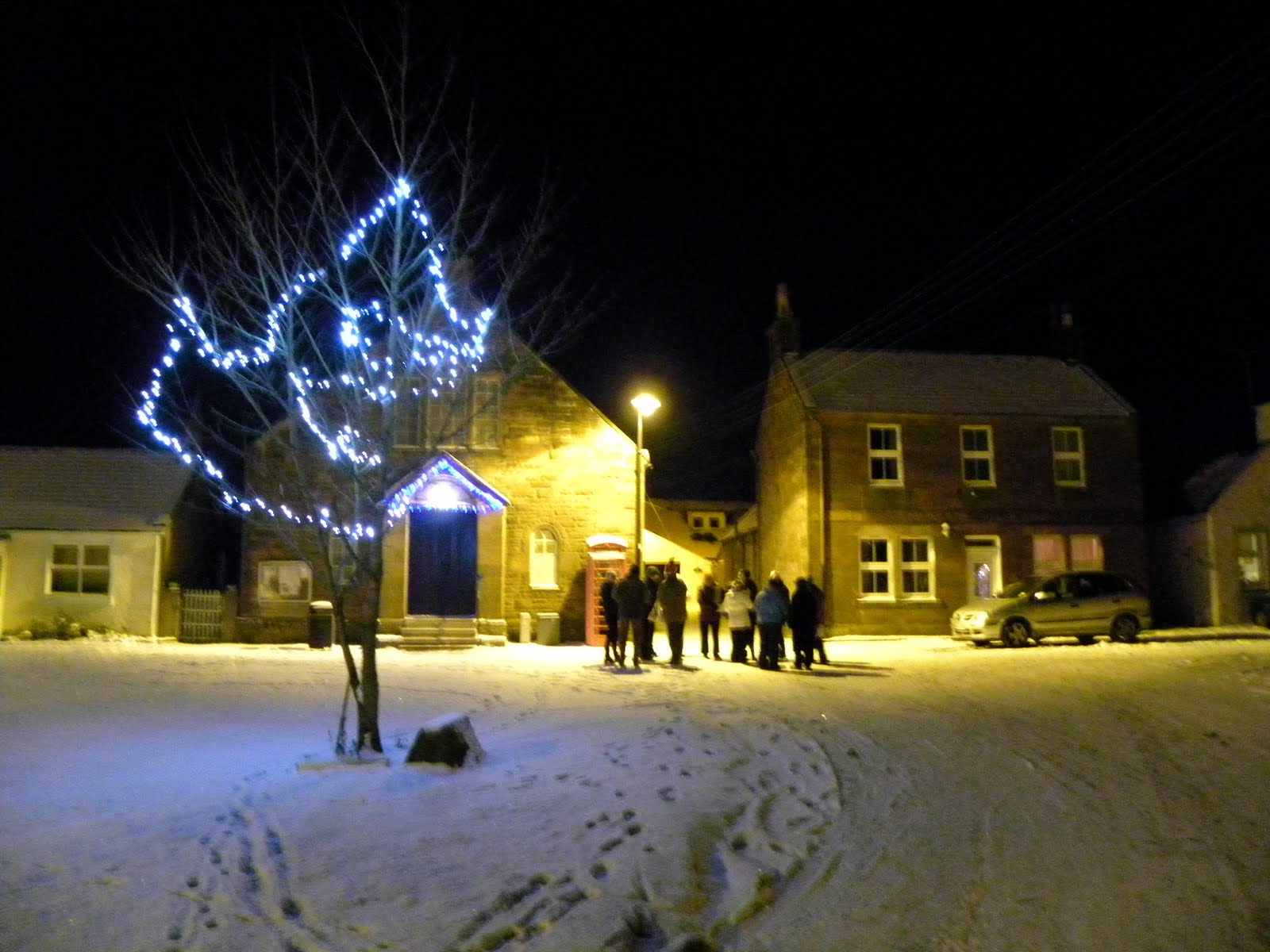 This is just to let you know that the carol singing in Kirkton before Christmas was a great success and it was particularly nice to see the number of young singers and collectors who participated.
I would like to thank everyone who sang, or helped and of course everyone who donated. I sent £140 to MacMillan Cancer Support which was £118 collected in the village plus other donations.

I have a letter of thanks from MacMillan which I will try to put up on the village notice board by the end of this week.

We will be meeting again on Tuesday 8th January
10.30am-12.30pm
at Kirkton Village Hall
There will be time to chat with friends and share a cup of tea or coffee

A Talk by Carolynne Sorrell on
An African Trip with Flowers 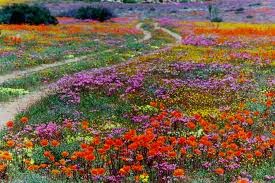 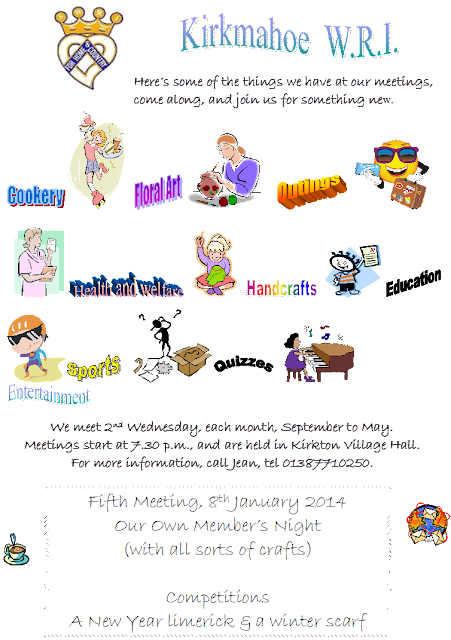 Posted by Kirkmahoe News at 11:37 No comments: