On a beautiful Spring afternoon the Joel Allison Quartet performed a concert of contemporary jazz at the Barony Church, Dalswinton. Anchored by the rock solid electric bass of the bandleader and kept rhythmically fresh throughout by the constant invention of drummer John Powney, the quartet moved effortlessly from atmospheric improvisation to standards like My Funny Valentine, as well as blues and modern jazz compositions.


Mark Townson’s electric guitar (occasionally sounding like a Hammond organ) wove complex textures of sound, from low volume filigree runs to hard-edged blues inflected chords. At times the inter-play between him and Allison was breathtaking, and always inventive and thoughtful.

The star of the show however was undoubtedly Kenji Fenton, a young tenor sax player who filled the superb acoustics of the Barony Church with a wall of sound that thrilled the audience. Equally at home on ballads, up-tempo blues and heavy syncopation, Fenton produced infinite variety in dazzling solos, shoulder-shrugging musical asides and close interplay with Townson on the main themes.
Outstanding numbers included Chick Corea’s Sea Journey; a barn storming sax solo on Freddy Hubbard’s Red Clay and restrained harmonics on Wayne Shorter’s Footprints. Unforgettable however was the joyously infectious rendition of Sonny Rollins’ calypso-like St Thomas. ‘Saxaphone heaven’ was how one Kirkmahoe Concerts regular described it, and no one would demur.

Don’t miss the next Kirkmahoe Concert on Saturday evening 28 May, when outstanding traditional musicians Chris Stout (fiddle) and Catriona McKay (harp) will be with us at Kirkton Church. For tickets call David Clark on 01387 740045.

(If picture on video is not showing all of the group click on the title of the video, and it should fix this.)
Posted by Kirkmahoe News at 12:24 No comments: 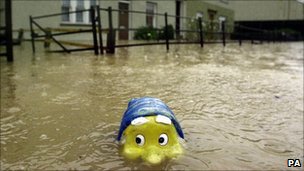 New telephone flood warning system launched
The telephone service will give advance warning of floods A new free telephone warning system will let people in Scotland know when their area is at risk from flooding.
The Floodline direct telephone service will send targeted flood warning messages to any registered mobile phone or landline.
The Scottish Environmental Protection Agency (Sepa) has increased the number of local flood warning areas from 78 to 220, each with unique flood forecasts.
According to Sepa, 100,000 properties in Scotland are at risk of flooding.
Environment minister Roseanna Cunningham said the measures would give people "more time to prepare and protect themselves" from flooding across the nation.
The tailored service is an update on Sepa's 24-hour recorded service - which can still be accessed.
Anyone can register for the service by going to the Floodline Scotland website http://www.floodlinescotland.org.uk/signup/                               or ringing 0845 988 1188.
Posted by Kirkmahoe News at 12:04 No comments:

Ferdinando Maria Meinrado Francesco Pascale Rosario Carulli to give him his full title was one of Europe's most celebrated and successful guitarist composers of the late 18th and early 19th Centuries. Many of the pieces now regarded as Carulli's greatest were initially turned down by the publishers as being considered too hard for the average player, and it is likely that many masterpieces were lost this way. Undeterred, Carulli started publishing his pieces himself. After leaving Naples in the early 19th century Carullli spent a little time in Milan before moving to Paris which was regarded at the time as the musical capital of the world, he spent the rest of his life there. In the 1830s, many European guitarists followed Carulli to Paris, apparently attracted by his personality. The Serenade is a beautiful and charming pieces which perfectly suits the salon style environment of this performance.


Locatelli was an Italian composer and violinist. He was born in Bergamo and as a child prodigy, he was sent to study in Rome under the direction of Arcangelo Corelli. He composed mainly for the violin although he also wrote a cello sonata, trio sonatas, concerti grossi and a set of flute sonatas. His early works show the influence of Arcangelo Corelli, while later pieces are closer to Antonio Vivaldi in style.
During 2011 we are celebrating a decade of playing together professionally and are giving many concerts, workshops alongside making various recordings throughout the year. These recordings were made by our good friends Frank, Wilhelmien and Bas at the Gitaarsalon in Enkhuizen, Holland.

We hope you enjoy this Italian offfering!

Everyone enjoyed the fourth Senior Citizens' Social Evening presented by Kirkmahoe Community Council - the audience of more than 30 senior citizens, the helpers and, not least, the performers. 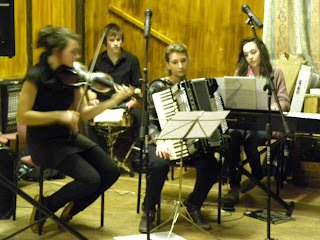 This year we were privileged to be entertained by a group of nine, very talented, senior pupils from Wallace Hall Academy.
Under the expert guidance of Kelvin Riley and Hannah Ferguson they put together a superb variety of music, ranging from an Hungarian Czardas on the violin (Amy Muirhead), 'I Dreamed a Dream' from Les Miserables (Amie Kirkpatrick), piano solos (Martha Ferguson), jazz pieces on the saxaphone (Erin Williamson), French accordion music (Adele Queen) and Scottish ensemble music (Erin McGinley and Grace Dale). 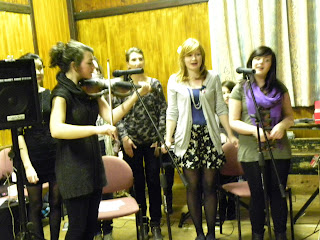 The audience were given a chance to join in and surprised the performers by their fine singing of traditional and modern songs, and of course there was the usual refreshment and raffle. 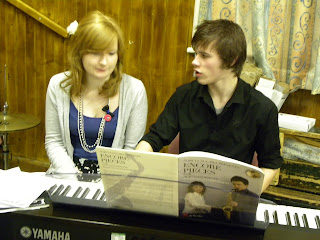 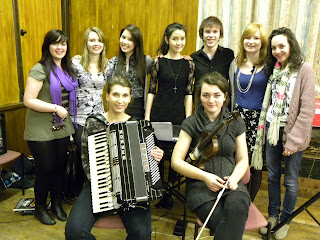 Thanks very much to the young people who gave up their time for the event and gave us such a good evening, we wish them all success in the future.( Jean Muir)
Posted by Kirkmahoe News at 11:17 No comments: