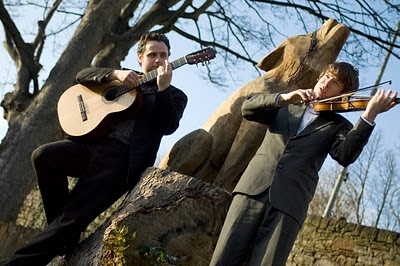 The violin and guitar duo Maelasta has appeared in major concert halls across the country including the Sage, Gateshead, the Harty Rooms in Belfast and the National Galleries in Edinburgh. They have performed and given workshops as far afield as Denmark and Abu Dhabi and recorded a debut album Maelasta for Natural Studio Records. The duo performs a wide range of music from classical works to traditional Scottish music. Their concert will include the virtuosic elegance of Paganini, through to the contemporary traditional music of Shetland’s Chris Stout.

... telepathic, dance-like interaction between the two musicians ... (The Scotsman)

Feargus Hetherington is one of Scotland’s most talented young violinists. He is also a highly accomplished viola player. Feargus studied at the Royal Scottish Academy of Music and Drama and the Cleveland Institute of Music, USA, where his teachers were Jerre Gibson, Angus Ramsay, Elizabeth Layton and David Russell. He has been guest leader of orchestras and chamber ensembles in Scotland and the USA and has participated in performances by many orchestras including the Scottish Chamber Orchestra. He is a former leader of the National Youth Orchestra of Scotland and the Cleveland Philharmonic Orchestra.

Matthew McAllister is one of the most exciting and talented classical guitarists in Europe. After an extremely busy start to his professional career, he has been delighting audiences across Europe and beyond with his thoughtful performances and effortless presentation, from renaissance miniatures to contemporary masterpieces. Matthew studied at the Royal Scottish Academy of Music and Drama, with Allan Neave. During his studies he toured with Scottish Ballet and performed at the 5th & 7th Simon Bolivar Guitar Festivals in London. Since graduating in 2003, Matthew has become a regular performer and educator at classical guitar festivals and concert series worldwide.