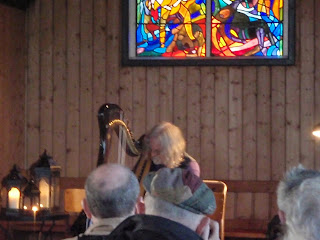 Over 70 people came to the Barony Church, Dalswinton, on the afternoon of 13 November for the second Kirkmahoe Concert. The featured artist was Robin Williamson. With dozens of albums in his back catalogue and an impressive array of books and sheet music collections to his name, Robin is a man with a mission.

A legend of the folk and world music scene, Robin was a founder in the 1960s of the widely- admired Incredible String Band. They went on to play at venues all around the world including the Woodstock Festival in 1969. Their fans still include Robert Plant, Billy Connolly and the Archbishop of Canterbury. A song-writer, poet, story teller and multi-instrumentalist, Robin is renowned for his enthralling solo performances. Currently touring the UK, he stopped off at Dalswinton en route to a show in Glasgow.

The Barony set began with a fine old harp tune, after which Robin went into the twists and turns of the epic story of the ‘Tune Twig’. Songs with harp followed including the old Incredible String Band favourite, Painting Box, and a stirring version of Bob Dylan’s Like a Rolling Stone. There were several songs with guitar, including two new pieces of his own which saw Robin in reflective mode, looking back on past wars and generations. 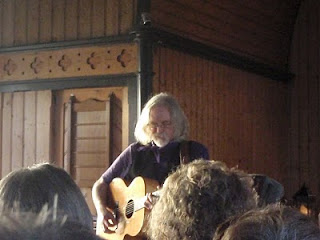 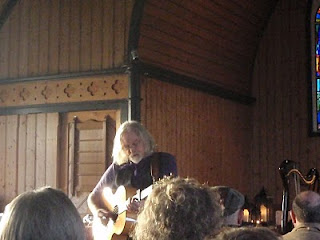 There was humour too – all for the Loan of a Glass of Beer and the gloriously unctuous country song – You Keep Me Stoned on Your Love all the Time.

For old fans it was a wonderful reminder of great gigs and albums in days gone by. And there were several new fans that afternoon too who were catching a Robin Williamson gig for the first time ‘unplugged’ in the perfect setting of the Barony Church. Delicious refreshments –kindly donated - were served afterwards and rounded off the afternoon beautifully.

And there is more good news – Robin is coming back. Make an entry in the diary now for 2pm on Saturday 12 November 2011- at the Barony Church! 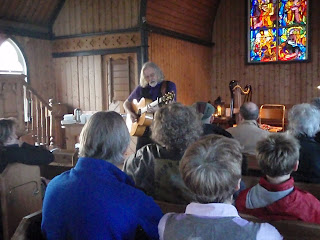 The Incredible String Band performing Painting Box below.
Posted by Kirkmahoe News at 10:14